In February 2009, Albion students boarded a bus with other students from across the state and made their way to Washington D.C. They were on their way to Powershift 2009, a summit organized by the Energy Action Coalition (EAC). Though this event was not associated with the official Powershift summit, it still allowed the participants to experience the power of the people and direct action towards sustainability. 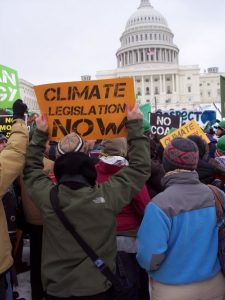 At the end of the summit, the participants gathered into a large rally on Capitol Hill, as seen in the photo above. Overall, Powershift 2009 held the record for the largest “clean energy” rally in U.S. history. Pryce Hadley, Albion College graduate of 2012, said, “2009 was an inspiring way to kick off my second semester at Albion College, and motivated me to take greater responsibility for environmental education and activism on campus.”

You can find a first-hand account of Powershift at the ECA’s website here. Albion College’s press coverage can be found here.