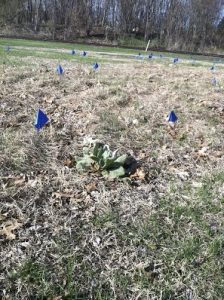 In 2012, Dr. Tim Lincoln received a grant from the Albion Community Foundation and the Albion Riverfront Community to establish an edible garden along the Albion River Trail. This edible garden, also known as permaculture, is designed to be an alternative to the intensive agricultural model used to grow most of the food that we eat. It contains perennial plants, such as fruit trees, strawberry plants, and smaller fruit and nut shrubs, which can be grown with a low energy input and without using fertilizers, minimizing its carbon footprint. The garden also prevents erosion and runoff along the banks of the river.

After initial troubles getting the garden started, such as deer problems and having the lower-growing crops destroyed by lawnmowers, Dr. Lincoln handed the project over to Dr. Doug White. In the spring of 2013, he really got the garden going, with help from volunteers, including Albion College athletic teams, students from the Center for Sustainability and the Environment, as well as many members of the Albion community. The garden is now being managed by students from Dr. White’s Introduction to the Environment Class.

The food that grows in this garden is available for anyone walking along the River Trail to enjoy, and the garden itself is a great example of the college and the community working together to do something good.